Sensory integration is an innate neurobiological process and refers to the integration and interpretation of sensory stimulation from the environment by the brain. In contrast, sensory integrative dysfunction is a disorder in which sensory input is not integrated or organized appropriately in the brain and may produce varying degrees of problems in development, information processing, and behavior. A general theory of sensory integration and treatment has been developed by Dr. A. Jean Ayres from studies in the neurosciences and those pertaining to physical development and neuromuscular function. Evidence-based treatments for supporting people experiencing sensory differences can improve comfort and quality of life.

Sensory integration focuses primarily on three basic senses–tactile, vestibular, and proprioceptive. Their interconnections start forming before birth and continue to develop as the person matures and interacts with his/her environment. The three senses are not only interconnected but are also connected with other systems in the brain. Although these three sensory systems are less familiar than vision and audition, they are critical to our basic survival. The inter-relationship among these three senses is complex. Basically, they allow us to experience, interpret, and respond to different stimuli in our environment. The three sensory systems will be discussed below. 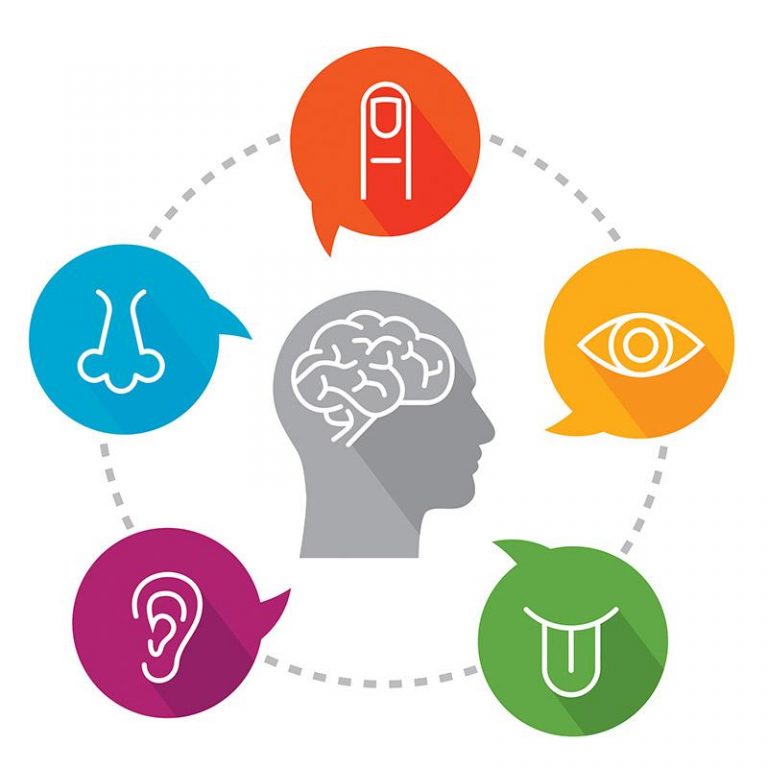 The tactile system includes nerves under the skin’s surface that send information to the brain. This information includes light touch, pain, temperature, and pressure. These play an important role in perceiving the environment as well as protective reactions for survival.

Dysfunction in the tactile system can be seen when an individual:

withdraws from being touched
refuses to eat certain ‘textured’ foods
refuses to wear certain types of clothing
complains about having one’s hair or face washed
avoids getting one’s hands dirty (i.e., glue, sand, mud, finger-paint)
uses one’s fingertips rather than whole hands to manipulate objects
A dysfunctional tactile system may lead to a misperception of touch and/or pain (hyper- or hypo-sensitive ) and may lead to self-imposed isolation, general irritability, distractibility, and hyperactivity.

Tactile defensiveness is a condition in which an individual is extremely sensitive to light touch. Theoretically, when the tactile system is immature and working improperly, abnormal neural signals are sent to the cortex in the brain which can interfere with other brain processes. This, in turn, causes the brain to be overly stimulated and may lead to excessive brain activity, which can neither be turned off nor organized. This type of over-stimulation in the brain can make it difficult for an individual to organize one’s behavior and concentrate and may lead to a negative emotional response to touch sensations.

The vestibular system refers to structures within the inner ear (the semi-circular canals) that detect movement and changes in the position of the head. For example, the vestibular system tells you when your head is upright or tilted (even with your eyes closed). Dysfunction within this system may manifest itself in two different ways. Some children may be hypersensitive to vestibular stimulation and have fearful reactions to ordinary movement activities (e.g., swings, slides, ramps, inclines). They may also have trouble learning to climb or descend stairs or hills; and they may be apprehensive walking or crawling on uneven or unstable surfaces. As a result, they seem fearful in space. In general, these children appear clumsy. On the other extreme, the child may actively seek very intense sensory experiences such as excessive body whirling, jumping, and/or spinning. This type of child demonstrates signs of a hypo-reactive vestibular system; that is, they are trying continuously to stimulate their vestibular systems.

The proprioceptive system refers to components of muscles, joints, and tendons that provide a person with a subconscious awareness of body position. When proprioception is functioning efficiently, an individual’s body position is automatically adjusted in different situations; for example, the proprioceptive system is responsible for providing the body with the necessary signals to allow us to sit properly in a chair and to step off a curb smoothly. It also allows us to manipulate objects using fine motor movements, such as writing with a pencil, using a spoon to drink soup, and buttoning one’s shirt.

Some common signs of proprioceptive dysfunction are:

clumsiness
a tendency to fall
a lack of awareness of body position in space
odd body posturing
minimal crawling when young
difficulty manipulating small objects (buttons, snaps)
eating in a sloppy manner
and resistance to new motor movement activities
Another dimension of proprioception is praxis or motor planning. This is the ability to plan and execute different motor tasks. In order for this system to work properly, it must rely on obtaining accurate information from the sensory systems and then organizing and interpreting this information efficiently and effectively.

Our Branches in Kukatpally And Chanda Nagar